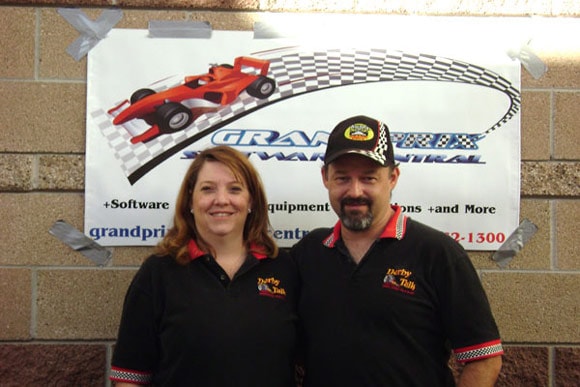 Our involvement in this type of racing began back in 1999, with our church's first Awana Grand Prix.  Our daughter, Amanda, was a 3rd grader (Chums), at the time.  It was our church's very first race, so I decided to help out where I could.  Little did I know what that would eventually lead to.

Well, I had not been fortunate enough as a kid to be involved in Cub Scouts, so I was not familiar with Pinewood Derby/Awana Grand Prix type racing at all.  I decided to do some research.  Surfing the web, I was rather surprised about the amount of information and tips that were available.  I dove in and tried to learn about building the cars and how the race was run.  I collected a lot of information from a variety of websites and tried to digest it all.

For Amanda's entry, she didn't want some simple car design, of course.  She wanted a dolphin!  "Oh brother," I thought.  That would be no easy feat when you only have a jig saw at your disposal to cut out the car.  Well, we managed to get the body cut out and used some balsa for the fins.  My wife, Shelly, helped with the paint job.  We put the wheels on as straight as we could and raised one of the front wheels.  We made sure to involve Amanda as much as she could at that age.  The car turned out rather nice for a first build.  It ended up winning 3rd Place for speed too.

In preparing for the race, we were starting from scratch, equipment-wise.  A gentleman from our church was a contractor and was tasked with building a 4 lane track.  I decided to give a go at building a timing system.  After reading about the difficulty of trying to eyeball judge a race, I figured that we really should have one.  I found some plans on the Internet for a simple parallel port sensor system, where the computer actually does the timing.  A small software program written in Basic and running on DOS (eek!) read the sensors and calculated the times.  The night before the race, I was working until 3am on it and just could not get it working.  So, come race day we ended up eyeball judging after all.  Of course, right after the race, I was able to quickly determine what the problem was and fix it.  Oh well, we had it ready for the next year's race.  By this point, I was totally hooked on this race, so I decided to run the next race.

The timing system was ready to go for that next race, but I really did not like the simple Excel spreadsheet that we used and having to use separate timing software.  I started looking around for some race management software.  I didn't really like the free or commercial software that was available at the time, as it didn't really run the race as our church preferred.  So, I decided that I would write some software myself.  That was the birth of our GrandPrix Race Manager software.  Our next race went really well and the software was a hit.  Version 1.0 was made available as shareware for a couple of years and received a lot of good feedback and suggestions for improvement.  Proceeds from the software went to our church's Awana program.  People at our church encouraged me to start selling the software, so I went ahead and rewrote it to be more of a commercial grade software package.  Our company, Lisano Enterprises, was born and we started selling the software.  That was in October of 2002.

Our business grew rapidly, as word of our software spread and timer manufacturers started packaging it along with their timers.  Over time, we added our RaceFX, DerbyDMV, and RaceReplay software packages to help enhance the race experience.  We even branched into some non-software products, like our Car Inspection Go/No-Go Gauges, in order to make races run even more smoothly.  By 2005, with a lot of help from Shelly, my wife, Lisano Enterprises became a full-time venture.  Each year we have improved our software and strove to provide quality service and support.

It has also helped that we have been active in this community by providing free information and resources to help build the cars and run the races.  Actually, before our GrandPrix Race Manager software was launched commercially, I created the GrandPrix Race Central website to be a central repository of information and resources to make a race coordinator's job easier.  In June of 2003, I launched the Derby Talk website.  It is a forum to discuss all aspects of building the cars and running the races.  Derby Talk has grown to over 3,000 members and 79,000 individual message posts.  The sharing of information has led to the running of many successful races and has helped many racers to be much more competitive at local and higher level races.

I have been quite blessed to be able to turn a hobby into a fun job.  Our 3 kids have been able to participate in many Awana and Cub Scout races over the years, building quite a collection of cars and trophies.  Not all their cars won in speed or design, but each year they did more of the construction and we enjoyed the time working together.  Even though our kids are all grown now, I continue to stay active by donating my time to run races for local Awana clubs that do not have their own track setup.